Far-Off Sightings of Fascinating People in the Big City

Far-Off Sightings of Fascinating People in the Big City

There is a man who wants to know everything, and a woman who secretly strews flowerseeds. Another woman has a snowman in her freezer, and yet another one stumbles all the time. There is a man who is looking for the woman with the gap between her front teeth, who he fell in love with on the U9. That was years ago. There is a man who loves his goldfish, a man who is afraid of little birds, and there is a stony faced man. There are over 3.4 million people in Berlin.

„Far-Off Sightings of Fascinating People in the Big City“ explores the degree to which one's private life becomes public in the city, and inverted, how one becomes a witness to hundreds of other people’s lives without wanting to.

It examines the consequences of this clash between personal and private spaces on human relationships: the flickers of interest on the one hand, and the empty stare that looks straight through people, on the other. It dwells on the pregnancy of the chance encounter. It questions how we can be surrounded by so many people and yet manage not to get to know them. It asks why so many people living in the city are so terribly alone.

This one-woman show with elements of acting, puppeteering and video, was written and is performed by Yvette Coetzee, a young South African actress/theatremaker. After her collaboration with the internationally acclaimed Handspring Puppet Company, she moved to Berlin in 2001. „Far-Off Sightings of Fascinating People in the Big City“ shows her reaction to this 'new' urban landscape and the people/characters inhabiting it. The director, Hendrik Mannes, has recently collaborated with Peter Brook on his production of "Happy Days" by Samuel Beckett. The original score was composed by Niklas Zimmer and Adam Lieber, and the Videoanimation was done by Tyson Cross.

"The South African, Yvette Coetzee, makes her wonderfully absurd subway tale come to life with charm and wildly overboard fantasy. Wonderful, in the best sense of the word."

"They take the subway day in and day out, but never reach their destination. City-dwellers searching for love, for meaning, for companionship...Coetzee tries to break through this urban thicket. She enters into the depths of the Berlin subway and the human soul. Her theatre fairytale dissects the state of city people who are willing but unable to couple up in a very nuanced way, and holds a mirror up to our anonymous society. 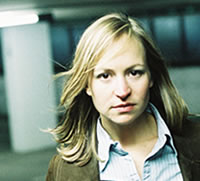